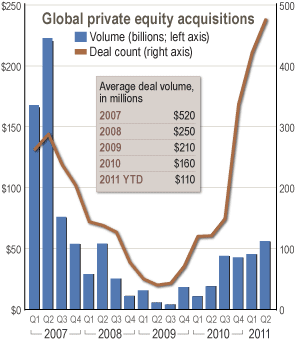 Bloomberg LP
Although 2011's deal count so far has exceeded full-year 2007, deal volume has equaled only 23% of that boom year.
Share 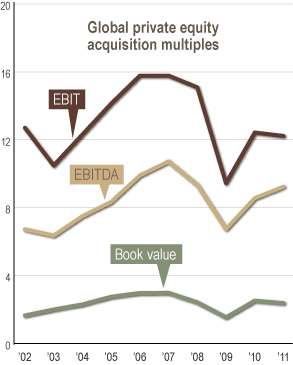 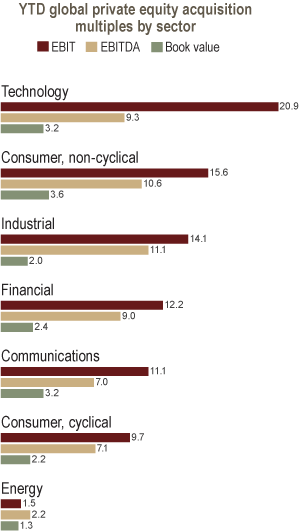 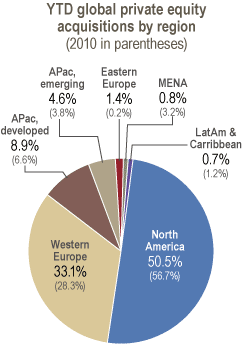 Bloomberg LP
U.S.-based acquisitions are down more than six percentage points through 2011 compared with full-year 2010.

Some of the most popular private equity funds — those once in such demand they could get away with charging above-market fees — are now finding it hard to fill their dance cards.

That pressure is causing some managers — such as BC Partners Ltd., Providence Equity Partners LLC and Bain Capital LLC — to cut fees, according to sources familiar with the matter.

For the first time, Bain Capital is giving investors two fee options for its second Asia fund, which, at $2 billion, is double the target of the first, which closed in 2007. Aside from the new fees, the new fund will also invest in India as well as in China and Japan, a source with knowledge of the situation said.

In addition to the typical 2% management fee and 20% carried interest fee, investors may choose Bain's standard management fee of 1% with 30% of the profits, but with a 10% preferred return. This is the minimum amount of return the fund must earn before the general partner can start collecting its portion of the profits.

Executives with BC, Providence and Bain declined to comment.

“When funds are raising new capital, they are coming under more and more pressure,” said Brian Talbot, managing director and head of Neuberger Berman LLC's team that invests on the private equity secondary market.

Most private equity firm general partners are willing to make concessions to larger investors if they make big investments, he said.

Firms whose last fund's performance is below par are having a rough time attracting investors now, also leading to more willingness to negotiate.

“The more underperforming the last fund, the more concessions they are offering investors,” said one institutional investor who asked not to be identified.

There also has been some movement in contract terms. A few firms are adopting what is called a “European waterfall,” which is considered more investor friendly. In general, this means cash called to pay management fees and other expenses is repaid to limited partners, and managers get their 20% share of the profits only after the fund achieves a certain internal rate of return. Investors' preferred return is on all capital that is drawn down.

“There's a half a dozen ways GPs can affect their fee income. I think some funds will reduce or relax fees because their prior performance hasn't warranted it and there is a desire to maximize fundraising results,” said Henry Robin, managing director at Invesco Private Capital in New York.

London-based alternative investments research firm Preqin has seen buyout fund management fees dropping to a mean 1.71% for funds with more than $1 billion, from a mean of about 2% in 2008.

Mr. Giannini said one reason for concessions is that the adoption of the Institutional Limited Partners Association's set of industry principles and best practices has given investors and general partners a common framework for discussion, Mr. Giannini said.

“This has given the LPs (limited partners) a little more leverage in this environment, particularly with larger firms,” he said.

Another factor is that institutional investor capital is not as plentiful as it was before the financial crisis.

Many institutional investors still have unfunded commitments and outstanding investments from prior years. What's more, general partners are far more conscious of making fundraising easier by being more flexible on terms.

“They are more willing to be `LP friendly' than to argue why their terms should be better than someone else's terms,” Mr. Giannini said. “This is true of both struggling funds and many oversubscribed funds. Few funds want to be branded as exceptionally greedy in this environment.”

Oregon expects to save $2 million on management and other fees under its new deal with KKR, according to Mr. Sinks.

“Fee negotiations are key with all of our private equity investments,” Mr. Sinks said. “We take efforts to make them as favorable as possible. It's the norm, rather than an outlier.”

Officials at the $154.2 billion California State Teachers' Retirement System, West Sacramento, Calif., are being offered concessions in exchange for making commitments earlier in the fundraising process or for making larger commitments, spokesman Patrick Hill stated in an e-mail response to inquiries. n