Assets of biggest players climb 8.2% a year after market horror, though future is cloaked in caution

The world's largest 300 pension funds enjoyed a respite in 2009 from one of the most destructive economic storms to emerge in recent times, growing 8.2% to $11.3 trillion in total assets, according to an annual survey conducted by Pensions & Investments and Towers Watson & Co.

But the gains fall short of pre-crisis levels, and uncertainties from several fronts in 2010 are threatening to once again put pressure on investment performance globally, said Carl Hess, global head of investment at Towers Watson based in New York.

“The economic stimulus that propped up the (global) economy in 2009 is expected to be phased out in the next 12 to 18 months,” Mr. Hess said. “The big question is what is going to replace it?”

Government economic initiatives implemented worldwide helped lead to a recovery in global equity markets that began in the second quarter of 2009. U.S. and U.K. pension funds — which Mr. Hess dubbed the “Anglo-American axis of equity” — accounted for about half the funds in the top 300.

“Funds did largely rebalance and so they enjoyed the bounce” in global equity markets, Mr. Hess said.

Roger Gray, chief investment officer of the Universities Superannuation Scheme based in London, summed up 2009 as “the flip side” of 2008. USS' large weighting in equities and alternatives, which together comprised about 80% of the investment portfolio, hurt the fund in 2008 but fueled a hefty gain of 50% in dollar terms to $48 billion for the 2009 survey.

“The large weighting (in equities) was a big part of it,” Mr. Gray said. “Another helpful factor during 2009 was the sterling's recovery against the dollar. Both of these things resulted in a partial reversal of what had happened in 2008.”

Negative impacts from currency movements for the dollar against other major currencies dampened the gains for some pension funds, Mr. Hess said. The result was slower growth rates for U.S. funds as a group compared with other countries such as Australia, China and Canada.

Currency movements were “pretty spectacular” in 2009, ratcheting up returns for many overseas funds in dollar terms, Mr. Hess added. (All fund assets are in U.S. dollar terms for the ranking.) For example, the euro's appreciation against the dollar and other currencies helped Europe regain its position as the second-largest pension fund market with 27.5% of total assets among the top 300 behind North America, which had 40.8%.

Cash contributions — or the lack of it — also determined how fast pension funds were able to recover from the lows of 2008, when assets for the top 300 funds fell 12.6%, the biggest drop since P&I began the survey in 1989.

The $1.32 trillion Government Investment Fund, Tokyo, grew 2.4% and remains the biggest fund with plenty of space between its closest follower — the $475.9 billion Government Pension Fund-Global, Oslo. The Norwegian fund was one of the fastest-growing in 2009 at 40%, mostly because of strong equity performance, appreciation of the Norwegian kroner and new asset inflows.

Dag Dyrdal, chief strategic relations officer at Norges Bank Investment Management based in Oslo, said the Norwegian fund had begun 2009 with a higher equity allocation because of a previous decision to increase the equity allocation to 60% of total assets from 40%. “We continued buying in the first two quarters” of 2009, Mr. Dyrdal added. By the year's end, the fund's equity portfolio had returned 34%, according to the fund's annual report. At the same time, the Norwegian krone appreciated against the dollar about 20%. On top of that, the fund also received a government contribution of 27 billion kroner ($4.3 billion).

“The overall result was good, but it has to be viewed very much in relation to poor figures in 2008,” Mr. Dyrdal said.

Assets at Stichting Pensioenfonds ABP, Heerlen, Netherlands, increased 23% to $299.9 billion and helped to secure the fund's third-place position, the same as the previous year. ABP was aided by “strong returns in stocks, especially emerging market equities, corporate bonds and real estate,” according to an analysis of the survey by Towers Watson.

“We stayed the course (through late 2008 and early 2009), which was a good thing because if we had reduced the risk profile then the recovery of the investment portfolio would have been much more limited,” said Ronald Wuijster, managing director of strategic portfolio management at APG Groep NV, Heerlen, Netherlands. APG manages assets for the now e208 billion ABP, among other clients. 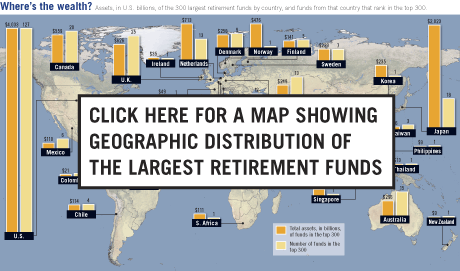 Back in top five

South Korea's National Pension Corp., Seoul, gained two positions to re-enter the top five with $234.9 billion, or a 23% increase in assets compared with the year earlier. In the U.S., the $234.4 billion U.S. Federal Retirement Thrift Investment Board, Washington, overtook the $198.8 billion California Public Employees' Retirement System, Sacramento, to become the largest plan in the world's largest pension market. Assets for the Federal Retirement Thrift increased 11.3% for the year while the investment portfolio at CalPERS shrunk 7.4%. As a result, CalPERS slipped out of the top five to No. 6 in the ranking.

The $130.5 billion California State Teachers' Retirement System, West Sacramento, climbed one notch to eighth place. Taiwan's Postal Savings, Taipei, was in eighth place in 2008 but dropped out of the ranking this year because of a change in methodology by Towers Watson. Relatively poor performance dropped a few U.S. funds in the top 20, and pushed the $91.36 billion Texas Teacher Retirement System, Austin, out of the top 20 altogether. Texas Teacher's assets had declined 4.8% in 2009.

South Africa's $110.9 billion Government Employees Pension Fund, Pretoria, entered the top 20 at 18th place because of high exposure to the domestic equity market and currency strength. The GEPF was previously in 29th place with $74.4 billion in assets. New asset inflows helped to catapult the Beijing-based $113.7 billion National Social Security Fund into the top 20 at 14th from 24th place the previous year, when the fund reported $82.4 billion in assets.

Sovereign pension funds, or those directly controlled by the particular country's government, were among the fastest growing because of new asset inflows. There are 26 sovereign funds, or 8.7%, in the top 300, controlling 28% of the total assets, according to Towers Watson's analysis.

Meanwhile, many U.S. public pension funds — including the $13 billion Illinois State Universities Retirement System, Champaign — struggled as pension payments far outpaced annual contributions, leading to forced selling of assets. SURS fell to No. 225 in 2009 from No. 183 the previous year.

“A number of government funds are quite cash-strapped as (state officials) are finding ways to avoid making pension contributions,” Mr. Hess said. “Meanwhile, they still have to make the pension (benefit) payments.”

Although defined benefit plans still dominate, representing 71.3% of the total assets, that share is smaller from the previous year, when DB plans accounted for 74.6% of the total. DB assets grew 4.4% in 2009, compared with the 16% increase in defined contribution assets.

As DC assets grow in size, the structure of DC plans will change as well, Mr. Hess said. “All sorts of things are going on, whether it be in target-date funds, post-retirement products or diversified growth strategies,” he added. “We're not done yet in terms of what the landscape will look like for DC. The only thing we're sure of is that it's going to look bigger.”

The economic outlook is also squeezing DB funds as pension executives worldwide are focusing more on risk management. Mr. Wuijster of APG again sees “a lot of pressure on pension funds” that began this year with Europe's sovereign debt crisis. “This is particularly problematic for Dutch pension funds because in our regulatory system, the 30-year swap (curve) is used to discount pension liabilities.”

At USS, fund officials had begun shifting more assets into alternatives ahead of the financial crisis, a development that will continue in the short term. “This is expected to dampen the portfolio's volatility should there be a future financial crisis,” according to Mr. Gray. Alternatives now account for 13% of the investment portfolio and the target is to reach 20% over the next two years.

Mr. Hess added: “We have potentially wildly swinging valuations as people grapple with the uncertainty about the economy that's lurching around. ... As a result, the short-term outlook for global economic growth will be bumpy. It doesn't mean that funds can't make money; it means that they need to be more nimble.” n