For most equity investors the decision to gain exposure to large, mid or small cap stocks is a critical first step in the allocation process. But how many investors consider exposure to all three categories simultaneously? An unconstrained approach to market capitalization choices, affording the opportunity to roam freely across the capitalization spectrum, can often be more beneficial. In the context of an “all cap” strategy we also look closely at the options for allocation and in particular how the allocation should be implemented.

The rationale for an all cap approach is simple: it can make a substantial difference to performance, as shown in Figure 1. From June 1952 through December 2008, $1 invested in a large cap core stock portfolio would have returned 11.5% annually whereas a small cap core portfolio would have returned 12.0%. A variation of 0.5% per year may not seem that great, but thanks to the power of compounding, the single dollar invested in small cap would have reached $603 in that period compared to $463 for the large cap – an improvement of 30%. What are the allocation options?

If we accept the argument for an all cap strategy, we need to examine the choices for implementation. There are two: a top-down approach, executed by the plan administrator, consultant, third party asset allocation specialist or portfolio manager, or a bottom-up methodology, driven by the manager. Adding value to market capitalization allocation by using top-down methods presents numerous difficulties.

Structurally, there are three key issues:

1. Who makes the top-down allocation decision? Does the plan administrator do it or does he/she hire an outsider? If the decision is outsourced how is the third party chosen?

2. How are the small, mid and large cap categories defined? Where is the assurance that the definition is accurate?

3. How is the allocation decision implemented effectively? Is it based on past performance or on a multi-factor model where, based on regression, historical data can be used to indicate probabilities ahead?

1. How are allocation weights determined? Should they be benchmark-based or subject to some other criteria?

2. When and how often should rebalancing take place?

Perhaps the greatest challenge to the top-down approach, however, is the volatility of historical performance data. Our research shows that simply looking at past relative performance or aggregate fundamental data is not sufficient to determine allocation weights today.

By way of example, Figure 2 provides a performance comparison between the large-cap core universe and its small-cap equivalent. It shows periods of extreme volatility over the period caused by seemingly random moves. Even with an overlay of fundamental data, it is difficult to use history as a guide for choosing current allocations.

Figure 2: The challenge in top-down allocation is that performance is volatile Even with an overlay of fundamental data, it is difficult to use history as a guide for choosing current allocations. By way of example, Figure 3 shows the relative performance of large-cap value stocks compared to small-cap value stocks from January 1990 to January 2002. In January 2000, at the height of the market upsurge, both asset classes were expensively priced and the performance variation was relatively small. But in subsequent years that variation widened dramatically as large-cap stocks underperformed.

Figure 3: Can we overlay fundamental data to make an assessment? 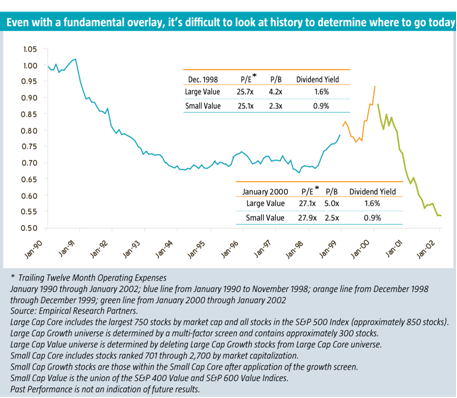 We believe an integrated bottom-up allocation approach has intuitive appeal because it removes the potential obstacles just mentioned. Since market cap asset allocation is secondary to stock selection, driven by the manager, there are no issues with decision-making, definitions or implementation.

This approach also has the following advantages:

• The manager is closer to the data, carrying out fundamental research every day as part of the stock selection procedure.

• Working in real time leads to better execution of allocation changes, removing the challenge faced by top-down decision makers as to how often and when they should rebalance. The bottom-up manager essentially rebalances every time he/she trades.

• The manager is using a systematic approach because allocations derive from an overall investment philosophy and process.

• Consistent application of a stated philosophy can make it easier to detect inflection points, helping to benefit from trends as they occur.

In conclusion, we believe that an all-cap strategy for equity investing offers significant potential advantage in light of the performance variations of individual market cap categories. This is especially true if the allocation is based on a consistent, bottom-up approach.

Robeco Boston Partners ("RBP") is a division of Robeco Investment Management, Inc. ("RIM"), an investment adviser registered with the SEC under the Investment Advisers Act of 1940. The views expressed in this commentary reflect those of the author as of the date of this commentary. Any such views are subject to change at any time based on market and other conditions and RBP and RIM disclaim any responsibility to update such views. These views may differ from those of other portfolio managers employed by RIM or its affiliates. Past performance is not an indication of future results. Discussions of market returns and trends are not intended to be a forecast of future events or returns.

No P&I Daily for MLK Day