Pension fund executives around the world are putting their faith — and assets — into emerging markets to provide more investment bang for the buck.

But some consultants and money managers believe pension funds still have a long way to go and need to increase those allocations closer to 35% of total assets — or roughly the weighting of emerging markets in the global economy — from the current allocation of about 5% or less for the average fund.

“Where pension funds are (invested in emerging markets), relative to where they should be, is a massive underweight position,” said Jerome Booth, London-based head of research and a member of the investment committee at Ashmore Investment Management Ltd. “This reality has been true for a while, but the credit crunch has made it much more obvious.”

The financial crisis has challenged several historical assumptions generally made about investments in developing nations, including the level of volatility, liquidity constraints and ability to withstand a severe global downturn. So far, emerging markets generally have fared better than major economies in weathering the storm, helping to attract assets at a record pace.

“We're in the midst of resetting the clock on emerging markets. Going into this (financial) crisis, the assumption that many pension plans — even the most sophisticated — made was that emerging markets would do less well than developed countries coming out of it,” said Cynthia Steer, chief research strategist and head of beta research group at consulting firm Rogerscasey Inc., Darien, Conn.

“A whole new construct is evolving — driven by factors such as higher (gross domestic product) growth and lower impact from the banking crisis on emerging markets. This is a presage to a re-evaluation of the risk/return relationship between developing and developed markets” by defined benefit pension fund executives, Ms. Steer said. “I think it is long overdue.”

The Morgan Stanley Capital International Emerging Markets index climbed 7.2% in the year since Lehman Brothers Holdings Inc. declared bankruptcy on Sept. 15, 2008. In comparison, the Russell 3000 index was down 11.7% and the MSCI World index, which tracks stocks in developed markets, returned -9.6% during the same period.

Emerging markets now account for about 12% of the MSCI All Country World index, which tracks companies in both developed and developing countries, compared with 5% at the beginning of this decade. However, the average exposure for pension funds investing in emerging market equity is between 3% and 8% of the total equity portfolio, and the average range for the emerging market fixed-income allocation is from 2% to 5%, according to estimates from consultants. Alternative investments in emerging markets probably total less than 2% of the total portfolio even for the most sophisticated pension funds, they said. Depending on individual funds' risk/ return targets, many should be doubling those exposures within the next five years, consultants said.

If considering other “forward-looking” factors such as future purchasing power of emerging economies combined with their outlook for gross domestic product, the allocation could go as high as 50% of total assets, said Mr. Booth of Ashmore, which had $31 billion in assets as of Sept. 30.

The $201.1 billion California Public Employees' Retirement System, Sacramento, is in the middle of a broader investment review of its global equity portfolio, which accounted for 51.7% of total assets as of July 31. Part of the plan is to shift the custom benchmark further from the U.S. and will likely include a higher allocation to emerging markets, said sources familiar with the fund.

Clark McKinley, spokesman for the fund, said in an e-mail response to questions: “Joseph Dear, our chief investment officer, has said more than once in recent days that emerging markets continue to be the most promising part of our global equity portfolio.”

“Clients have been spending more time considering what the drivers of global (emerging markets) economic growth are, and how to potentially target that growth” in their asset allocation model, said Craig Mercer, senior investment consultant within the global manager research team at Watson Wyatt Worldwide based in London. “Many of our clients are underweight emerging markets relative to the market capitalization of global markets. If you look at it from a GDP-weighted perspective, some clients are quite significantly underweight.”

Emerging economies account for about 35% of the global economy on a GDP-weighted basis. Emerging market real GDP growth is expected to reach 5% in 2010 from 1.75% in 2009, powered by China, India and Brazil among others, according to the World Economic Outlook report published in October by the International Monetary Fund. The real GDP growth in the United States is expected to hover around 1.9% while Japan's is about 1.4%. Eurozone advanced economies will probably grow at a rate of 0.9% in the same year, according the report. 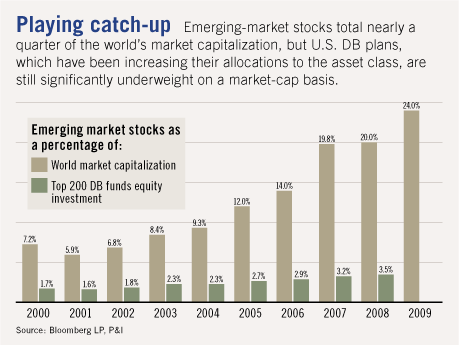 “Emerging markets are set to have a higher growth rate (than developed markets), and therefore, we see more potential to find good investments there,” Mr. Ritakallio said. “We're just waiting for the right opportunities and the right managers.”

“We were underweight emerging market equities and as the expected GDP (in emerging markets) is stronger than the developed economies, it was considered a sensible move,” Ms. Saunders said.

At the Arizona State Retirement System, officials decided in October to carve out 3% of the fund's total assets — or about $690 million — to be dedicated to emerging market equity. Funding will come from an international equity portfolio that accounts for about 18% of the portfolio, of which about one percentage point is in emerging markets.

The strategy, which will be implemented next year, is the fund's first dedicated emerging market mandate, according to Paul Matson, executive director.

Mr. Matson added that “a modest allocation is prudent” due to several factors specific to emerging markets, such as higher expected productivity, population growth and a jump in discretionary income.

Total institutional pension fund asset inflows into emerging market strategies globally are not available, but several indicators point in the same direction — that growth in the asset category still has a long way to go, consultants and managers said. According to Boston-based EPFR Global, which tracks flows into emerging market mutual funds, asset inflows for emerging market equity strategies totaled $52.6 billion for the nine months ended Sept. 30, which is “within striking distance” of the $54.3 billion of the record set for the entire year in 2007. In 2008, net asset outflows in the same funds totaled $49.4 billion.

However, due to massive post-Lehman outflows, most active emerging market managers are still hovering below their peak levels of assets under management reached in 2008.

“In general, there is a resumption of a longer-term trend in which investors are gradually reallocating toward emerging markets,” said Brad Durham, managing director of EPFR Global.

Some experts invoke a cautionary note.

George Hoguet, managing director and global investment strategist specializing in emerging markets at State Street Global Advisors in Boston, said while emerging market opportunities are set to broaden at least in the next five years, valuations are becoming more unattractive.

“One has to bear in mind that valuations in emerging markets are not particularly cheap,” said Mr. Hoguet, whose firm manages about $34 billion in dedicated emerging market strategies.

Nicola Ralston, director of London-based independent consultant PiRho Investment Consulting, warned that pension fund executives should not overweight emerging markets simply because those nations are deemed to be growing at a faster pace. Any additional investments should be based on the fund's own risk-adjusted return target.

“This idea that emerging markets are growing fast, and that investors can easily access that growth through overweighting emerging markets is not helpful,” Ms. Ralston said. “What (investors) might be overlooking are the additional risks — for example, volatility remains an issue.”

In certain nations, including China, access remains a constraint as a large part of the economy is not available for purchase by overseas institutional investors. And if investors are looking for diversification through emerging markets exposure, they need to consider that larger companies within emerging market nations are often more correlated to global — rather than domestic — growth. Ms. Ralston added: “Investors may not be getting what they're after.”

Preparing for the future

Crisis shows links not broken yet

Preparing for the future

Crisis shows links not broken yet