The land of opportunity

Deals are sparse today, but managers and investors see big things — and big returns — ahead for those investing in America

U.S. infrastructure, a main target of economic stimulus money from the federal government, is stimulating interest from infrastructure investment firms and some investors.

However, the deals are few, as little of the $170 billion in global infrastructure funds amassed in the past two years will be spent in the U.S., industry insiders predict. That's despite a $2.2 billion need for American infrastructure investment.

Still, managers that include one of the world's largest infrastructure investors — Macquarie Bank — see gold in the roads of the U.S. Stephen Mentzines, a managing director and head of North American Macquarie Capital Funds, said while private-public partnerships in the U.S. are in their “embryonic phase,” the firm sees opportunities in toll roads, utilities, airports, ports, renewable energy and communications infrastructure.

And there is interest among institutional investors, many of which are carving out infrastructure allocations. Infrastructure investing has grown at a rapid pace in the U.S. — up 270% to $2.28 billion among the largest 200 retirement funds in the year ended Sept. 30, 2008, according to Pensions & Investments' most recent survey (P&I, Jan. 26).

Unlike infrastructure projects elsewhere in the world, U.S. projects get predominantly public money through municipal bonds. A privately funded model for infrastructure requires a shift in funding source — and a shift in public policy and political will. 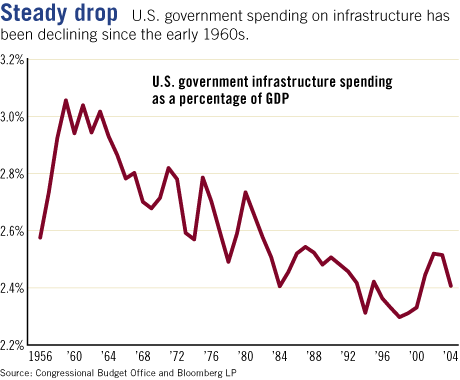 Some managers and consultants see signs that the tide is turning. Officials in California and New York each formed a commission to act as a clearinghouse for private investment in infrastructure in their states. These commissions are modeled after national clearinghouses set up in Canada and the United Kingdom that helped the most recent boom of private infrastructure investments.

“The U.S. is very much an emerging market” for infrastructure, said Richard Lee, partner and head of KPMG's U.S. infrastructure advisory group, New York. “Most of the money raised has been for global funds.”

“Still, large sums of money have been amassed patiently waiting for the wave of opportunity in the U.S.,” he said.

It's not just pension funds, either. The $1.5 billion Ohio State University Endowment, Columbus, recently carved out a 9% allocation to real assets — including infrastructure — with the potential to raise that to 25% of total assets. And all sovereign wealth funds with total assets of between $50 billion and $100 billion have infrastructure allocations, according to Preqin data.

In an effort to take control of their investments and cut fees, a group of about 10 U.S pension funds led by the $63 billion New Jersey Division of Investment, Trenton, as well as some of the most active pension funds in Australia and Canada began informal discussions on forming infrastructure investment consortiums (P&I, Feb. 23). The group includes the $122.4 billion California State Teachers' Retirement System and $187.2 billion California Public Employees' Retirement System, both of Sacramento.

Return expectations among infrastructure investors vary, in part, based on whether they are just starting to invest in infrastructure and their appetite for risk within the portfolio. For example, CalSTRS is looking for low-leverage investments with steady cash flows and returns in the “high single digits” that provide a premium above fixed income, said Christopher J. Ailman, chief investment officer.

Most infrastructure money managers are aiming for a 10% to 20% return, depending on the strategy, according to a Preqin study. But some firms, like Macquarie, are aiming for returns in the low to midteens.

Much of the capital being allocated by U.S. institutional investors is expected to be spent abroad as U.S. governmental entities struggle with whether they can deal with private capital.

“The biggest problem we have in the U.S. is that we have a culture where we expect infrastructure to be owned by the government and don't trust government when they put it into private hands,” said Scott Swensen, chairman of Conduit Capital Partners LLC, New York. “Europe and Australia have a long history of infrastructure owned by the private sector.”

“U.S. deals are trickling out because we are in the early stage of getting public-private partnerships going,” said Tim Wilschetz, principal in KPMG's U.S. infrastructure advisory group.

Public-private partnerships have gotten a bad name in the U.S., where discussions have taken on the tone of “selling the family silver,” KPMG's Mr. Lee said.

The collapse in April of a $2.5 billion deal to privatize Chicago's Midway Airport is the most recent U.S. infrastructure pothole. The recession put the brakes on efforts to obtain financing by the buyers' consortium composed of Citigroup's Citi Infrastructure Investors along with Vancouver Airport Services and John Hancock Life Insurance.

The economy is slowing the flow of deals in the U.S.'s nascent infrastructure market.

“There will be sporadic activity in the U.S. to start out with,” said Marc S. Lipschultz, who heads New York-based Kohlberg Kravis Roberts & Co.'s energy and infrastructure investment teams. “Infrastructure is more advanced elsewhere.”

“There are so many infrastructure funds with so much money and so little in the U.S. that most of the funds have a difficult time putting it (the capital) to work,” Mr. Swensen said. “But it's early yet in the game because most funds have been raised in the last 18 months.”

“For years, I have been expecting some sort of sudden breaking point where the states and the federal government decide they can't afford to do it on their own and to let private investors take over, but I have not seen it yet,” said Leola Ross, senior research analyst, Russell Investments, Tacoma, Wash.

There are basically, two conditions before there can be a significant flow of private capital into infrastructure in the U.S., she said.

First, private investment is really only possible if the government allows it.

The second condition is financing.

While financing has not been a problem for certain types of projects — for example, more mature infrastructure projects with cash flows that are easier to calculate — that doesn't mean financing infrastructure has been a breeze in the last 18 months.

Energy Investors Funds, which invests in so-called “hard assets” such as power plants, pipelines and transmission lines, has obtained $3 billion in debt for global projects in the past 24 months, said Terence L. Darby, the New York-based managing partner. For example, on July 22, EIF closed on almost $600 million of bank financing in the form of increased credit facilities and extended debt maturities for three of its funds. The firm invests in projects with long-term cash flows, he explained.

Infrastructure as an investment strategy has grown quickly over the past 15 years.

The world is in the beginning of the third wave of infrastructure investments and managers.

The next wave started when investment banks around the world began relying on the flow of transactions to generate fees, both on the equity and debt sides.

Most of these managers are using a private equity-style fund model rather than a publicly held fund strategy.

Even the granddaddy of infrastructure investing, Macquarie Bank, is switching from a listed fund model to a private equity fund model, the firm acknowledged in a news release issued last month. Within the past few months, it has started selling the rights to several of its Australian-listed vehicles, amassing the majority of new capital through private equity-style infrastructure funds. Its North American business only offers private equity-style infrastructure funds. “There was a gap between share prices and the real value of the assets,” said Alex Doughty, New York-based Macquarie spokesman. However, Mr. Doughty was adamant that the firm has no plans to sell its rights to infrastructure in the U.S.

Investors and money managers entering this third wave are discovering that infrastructure is not a homogeneous asset class. Indeed, these days “infrastructure” is somewhat of a term of art. Money managers are dumping everything into it, from energy producers to “infrastructure-related” investments in engineering, construction companies, architectural firms and merchant energy generators that are exposed to the swings of the public commodities markets.

Investors are finding that not all infrastructure projects have the same risk-return profiles. Investors expect that the long-term assets will produce steady returns with low level of risk. But private equity-style funds have private equity definitions of “long-term”— three to seven years.

Energy Investors Funds offers private equity-style funds that invest in the U.S and its funds have five- to seven-year investment lives, Mr. Darby said. The projects that best match this lifespan are green-field deals where more development is required, which have the potential for higher returns but also carry much higher risk.

“A lot of private equity funds look at five to 10 years and then flip. They will take on risk to develop an asset and they want to get paid for development risk,” said Mike Lucki, global infrastructure leader, Ernst & Young LLP, New York. “Pension funds want infrastructure to fit the profile of their (beneficiaries) of 20 to 30 years and they need more developed assets.”

The risks of the infrastructure investments are different. Private funds have limited liquidity, “if you have to sell an asset you will take a hit,” she said.

Even less risky projects like toll roads and ports have had ups and downs. For example, U.S. toll road revenues are down 4% to 7% in the past 12 months because of higher gas prices and the recession, and many U.S. ports are suffering from the recession and a drop-off of imports from China, said Mr. Lee of KPMG.

Infrastructure is beginning to be divided into two broad types: core — which is regulated by public authorities, has a bar to entry and guaranteed revenue, such as toll roads — and non-core, which is everything else, said Mathias Burghardt, head of the infrastructure group as AXA Private Equity, Paris.

This economic crisis has redefined infrastructure for investors as investments that are long duration, generate income and protect against inflation, he said.

“Today those investments are mostly in Europe. In the future, the U.S. will be a major market."