I took my troubles down to Madame Rue

You know that gypsy with the gold-capped tooth

She's got a pad down on 34th and Vine

I've never known any gold-capped tooth money managers, but without squinting very hard there is undoubtedly a strong resemblance between all of us “managers” and the infamous Madame Rue selling Potion #9. Instead of love, though, we sell “hope,” but very few are able to seal the deal with performance anywhere close to compensating for the generous fees we command. Hope has a legitimate price, of course, even if its promises are never fulfilled. It is the reason we put a five spot into the collection plate on Sunday mornings and why we risk a 25-dollar chip at the blackjack table. In the former case we usually rationalize it as “insurance,” and with the latter as “entertainment.” Whatever – I've already alienated all of you with strong faith in the hereafter or the ones who actually believe they're going to win on their next trip to Las Vegas. But my point is that those who sell investment “potions” must wrap their product with an extra large ribbon because history is not on their side. Common sense would dictate that the industry as a whole cannot outperform the market because they are the market, and long-term statistics revealing negative alpha for the class of active managers confirms it. Yet, what a price investors are willing to pay! A recent Barron's article pointed out that stock funds extract an average 99 basis points or virtually 1% a year in fees from an investor's portfolio. Bond managers are more benevolent (or less pretentious) at 75 basis points, and many money market funds manage to subsist at a miserly 38. Still, those 38 basis points are as deceptive as the pea that disappears beneath the shell of a street-side con game. Since money market funds barely earn 38 basis points these days, much of the return winds up in the hands of investment managers. A mighty expensive potion indeed. While some index and ETF proponents avoid this extreme absurdity with lower fees, roughly 90% of the $1.5 trillion in 401(k) and other defined contribution assets in mutual funds are in actively managed offerings with expenses close to 1%. Paying for those potions during an era of asset appreciation with double-digit returns may have been tolerable, but if investment returns gravitate close to 6% as envisaged in PIMCO's “new normal,” then 15% of your income will be extracted based on the beguiling promise of Madame Rue. The solution, of course, is to compare long-term performance with fees and approach 34th & Vine with informed confidence, as opposed to Pollyannaish hope that you'll get your money's worth. Down the hatch and good luck!

Investors looking for love potions or successful investment strategies in this new normal economy dominated by deleveraging and reregulation must focus on some very macro-oriented ingredients as opposed to typical news-dominated minutiae. The latest quarterly earnings report from Goldman Sachs may be an indicator that the financial sector is getting some color in its cheeks, but it doesn't really let you know what needs to happen in order for the real economy to stabilize as well. My last month's Investment Outlook commentary on the significance of wage and employment trends remains the key focus. Common sense tells us that consumer spending growth comes from highly employed, well-compensated labor, and we are far-far from even approaching that elemental condition. The fact is that near double-digit unemployment has resulted from numerous business models that are now broken: autos, home construction, commercial real estate development, finance, and retail sales. Construction of a new Humpty Dumpty capitalistic “oeuf” will be a herculean task.

Potion hunters, however, should also understand the following macro concept that will dominate the indefinite future, one which I will humbly try to explain in the next few pages in 500 words or less: Reflating nominal GDP by inflating asset prices is the fundamental, yet infrequently acknowledged, goal of policymakers. If they can do that, then employment and economic stability may ultimately follow.

A country's GDP or Gross Domestic Product is really just an annual total of the goods and services that have been produced by its existing stock of investment (capital in the form of plant, equipment, software and certain intangibles) and labor (people working). Over the last 15 years or so in the U.S. that annual production (GDP) has increased in nominal (real growth and inflation) terms of 5-7% as shown in Chart 1. Not every year, certainly not in boom or recessionary years, but pretty steadily over longer timeframes, and consistently enough to signal to capitalists that 5% was the number they could count on to justify employment hiring, investment spending plans, and which would serve as well as a close proxy for the return on capital that they should expect. Nominal GDP is in fact a decent proxy for a national economy's return on capital. If each and every year we grew by 5%, then that would be sort of like a stock whose earnings grew by the same amount. Companies and investors then would be able to estimate the present value of those cash flows, and price investment and related assets accordingly – a capital asset pricing model or CAPM based on nominal GDP expectations. 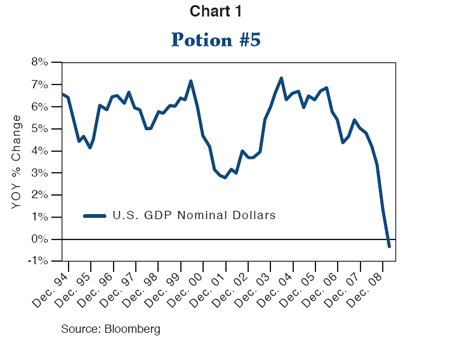 While objectively hard to prove, logic dictates that that is exactly what has happened over the past several decades. Businesses expanded with a developing certainty that demand, expenses, and return on the economy's capital would mimic this 5% consistency. Debt was issued with yields that reflected the ability to service those payments through 5% growth in both real and inflationary terms, and stocks were issued and priced as well with the same foundation. Pension obligations and similar liabilities were legitimized on comparable logic, as were government spending programs forecasting tax revenues and benefits. Both real economy and financial markets then, were geared to and, in fact, mesmerized by this 5%, GDP/CAPM, “model.”

Now, however, things have changed, and it is apparent that there is massive overcapacity in the U.S. and indeed the global economy. As reflexive delevering has unveiled the ugly stepsister of the “great 5% moderation,” nominal GDP has not only sunk below 5%, but turned at least temporarily negative. If allowed to continue – and this is my critical point – a portion of the U.S. production capacity and labor market will have to be permanently laid off. Nominal GDP has to grow close to 5% in order for the economy's long-term balance to be maintained. Otherwise, employment levels become unsustainable, retail shopping centers unserviceable, automobile production facilities unprofitable, and the economy itself heads towards a new normal where unemployment averages 8 instead of 5%, housing starts total 1.5 instead of 2 million, and domestic auto sales 12, instead of 16 million annual units. Critically in the readjustment process, debts are haircutted via corporate defaults and home foreclosures, and equity P/Es are cut based upon increased risk and substantially lower growth expectations. A virtuous circle of expansion turns into a vicious cycle of recession or low-growth stagnation. Label it what you will, but a modern capitalistic economy based on levered financing and asset appreciation cannot thrive if its “return on capital” or nominal GDP suffers such a significant shock.

Policymakers/government to the rescue –we hope. 0% interest rates, quantitative easing, $1.5 trillion deficits, trillions more in FDIC or explicit government guarantees, a trillion plus in MBS and Treasury bond purchases, TALF, TARP – I could, but I need not go on. Can they do it? In other words, can they successfully reflate to 5% nominal GDP and recreate an “old” normal economy? Not likely. The substitution of government-backed vs. private-leverage is one strong argument against the possibility. Despite the attractive financing rates incorporated with the TALF, TLGP and other government-subsidized financing programs, they come with quality constraints (larger collateral haircuts and mortgage down payments, to name a few) that inhibit the “new normal” lenders from approaching the standards of the 5% nominal-based shadow banking system. Just last week, President Obama proposed new “transaction fees” for “far out transactions” undertaken by financial companies. “If you guys want to do them,” he said, “put something into the kitty.” In turn, there are internal Washington Beltway/external Main Street USA, politically imposed limits which will thwart policy expansion beyond the current stasis. Most of the politicos and even ordinary citizens are screaming for limits on monetary/fiscal expansion: “No TARP II! 1.5 trillion dollar deficits are enough! The Fed must have an exit plan!” etc. If there are such future political constraints or caps (both domestically and from abroad), then one should recognize that most of the ammunition has been spent stabilizing the financial system, and very little directed towards the real economy in terms of job loss prevention. Where is the political will or wallet now to grant corporate tax breaks for private sector job creation or to even hire new government workers, aside from a minor positive push with military enlistment? In brief, the “new normal” nominal GDP, the future return on our stock of labor and capital investment, will likely be centered closer to 3%, for at least a few years once a recovery is in place beginning in this year's second half. Diminished capitalistic risk taking and constrained policymaker releveraging will lead to that likely conclusion.

Investment conclusions? A 3% nominal GDP “new normal” means lower profit growth, permanently higher unemployment, capped consumer spending growth rates and an increasing involvement of the government sector, which substantially changes the character of the American capitalistic model. High risk bonds, commercial real estate, and even lower quality municipal bonds may suffer more than cyclical defaults if not government supported. Stock P/Es will rest at lower historical norms, and higher stock prices will ultimately depend on tangible earnings growth in the form of increased dividends, not green shoots hope. An investor should remember that a journey to 3% nominal GDP means default/haircuts for assets on the upper end of the risk spectrum, as well as extremely low yielding returns for government and government-guaranteed assets at the bottom end. There is no investment potion for this new environment other than steady income-producing bond and equity investments in companies with strong balance sheets and high dividend yields, as well as selectively chosen emerging market commitments where nominal GDP growth prospects are tilted upward as opposed to gravitating to new lower norms. Madame Rue has met her match.

Past performance is not a guarantee or a reliable indicator of future results. Investing in the bond market is subject to certain risks including market, interest-rate, issuer, credit, and inflation risk; investments may be worth more or less than the original cost when redeemed. Equities may decline in value due to both real and perceived general market, economic, and industry conditions. Investing in foreign denominated and/or domiciled securities may involve heightened risk due to currency fluctuations, and economic and political risks, which may be enhanced in emerging markets. Money Markets are not insured or guaranteed by the FDIC or any other government agency and although they seek to preserve the value of your investment at $1.00 per share, it is possible to lose money.

This article contains the current opinions of the author but not necessarily those of the PIMCO Group. The author's opinions are subject to change without notice. This article is distributed for informational purposes only. Forecasts, estimates, and certain information contained herein are based upon proprietary research and should not be considered as investment advice or a recommendation of any particular security, strategy or investment product. Information contained herein has been obtained from sources believed to be reliable, but not guaranteed. No part of this article may be reproduced in any form, or referred to in any other publication, without express written permission of Pacific Investment Management Company LLC. &Copy;2009, PIMCO.

April 2009: The Future of Investing: Evolution or Revolution?

No P&I Daily for MLK Day