Equity money managers and some in alternative investments are among the likeliest to benefit as sovereign wealth funds globally seek to diversify from government bonds — particularly U.S. Treasuries — a new survey shows.

About 56% of 146 money management executives who routinely work with the funds said the equity allocation is likely to rise over the next five years, according to “Analyzing SWFs Through Proxy: The Oxford Survey of SWF Asset Managers,” a survey conducted by the Oxford University Center for Employment, Work and Finance, Oxford, England. The survey, which can be found here, was co-sponsored by Pensions & Investments.

(The full special report, including select profiles, charts and data, is available here.)

Real estate will also become a larger portion of SWF portfolios during the same period, according to 53% of the respondents.

In an interview with P&I, Andrew Wilson, managing director and global co-head of the fixed-income and currency team at Goldman Sachs Asset Management in London, said equity and alternatives will not be the only asset classes to benefit from the reduction in government bonds. Sovereign wealth fund executives increasingly are awarding mandates in corporate bonds, mortgage-backed securities and high-yield bonds. 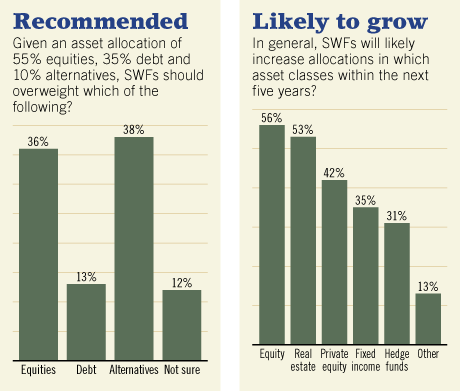 The Sovereign Wealth Fund Institute — a research and consulting firm based in Roseville, Calif. — estimates the 51 SWFs it researches account for about $3.65 trillion in assets, according to April data.

Separate research by State Street Corp., Boston, shows aggregate SWF assets could total between $4.85 trillion and $6.93 trillion by 2012, depending on factors such as the price of oil, a main source of inflows for many of the funds.

Therefore, an aggregate asset allocation shift of several percentage points could translate to hundreds of billions of dollars.

“At the end of the day, there is still continued pressure to invest for growth,” said Cynthia Sweeney Barnes, London-based global head of sovereigns and supranationals at HSBC Global Asset Management Ltd. The firm's assets under management for SWF clients were not provided, but Ms. Barnes said the firm has recorded net inflows from SWFs in 2009. Mandates won this year — some totalling more than $1 billion each — have been in private equity, emerging markets debt, Asian equity, European fixed income and global fixed.

Mr. Monk said sovereign wealth funds have “the potential to have such a long-term (investment) horizon ... perhaps the longest-term view among all institutional investors.”

Consultants and money managers stressed that while SWF investment strategies cannot be generalized and vary widely between funds, they tend to fall into two broad categories: The majority has at least half of their assets in fixed income; the remainder have at least 50% to 60% of their assets in equities and as much as 20% to 25% in alternatives.

Roger Urwin, Watson Wyatt Worldwide's global head of investment content in Reigate, England, said officials at some sovereign wealth funds are discussing ways of shifting a larger portion of the fixed-income portfolio into equities and alternatives.

“You find (fund executives) debating a move in that direction, but it's not obvious that they're moving in that direction yet,” Mr. Urwin added. “A bigger change, as a result of the economic crisis, has been in the area of risk management.”

Similar to other institutional investors, SWFs are analyzing their risk management structures to cover a broader array of potential investment hazards and a deeper understanding of how those risks relate to one another. “They want to be better prepared for potential circumstances and opportunities, as well as market downfalls,” Mr. Urwin said.

SWFs have altered their investment approach as a result of the crisis. “What I see is more attention on strategic types of investments, rather than short-term windfall returns,” Oxford's Mr. Clark said.

Fund officials are also paying closer attention to operational as well as investment issues, added Mailesh Shah, London-based head of Mercer's investment consulting division in the Middle East and Africa. Officials at SWFs are considering not only “ways of taking advantage of the opportunities, but also questions that include whether they will have to move faster than in the past. It's an issue of asset allocation and an issue of implementation.”

“We find that the dialogue with SWFs goes beyond individual mandates to also include other services such as providing additional training, education and intellectual capital, which are all symptoms of a relationship that's more of a partnership.”

Among the services that managers often provide to SWFs is asset allocation advice. Concern about the fast-rising levels of developed government debt globally is one reason SWF officials are considering a higher allocation to equity. Historical data also suggest that equities tend to outperform bonds over the longer term. Furthermore, the size of the global equity market means fund executives can invest “a lot of money without concentrating the investments,” Mr. Clark added.

“Government bonds will take a big hit,” according to the survey report. “This is understandable, as the initial impetus behind many SWFs was a desire to diversify foreign exchange reserves out of government bonds (specifically U.S. Treasuries) into riskier, higher yielding securities.”

“However, at the margin, and to the extent that the (funds') focus will be more on equity and alternatives — including real estate — there will be upward pressure on government bond yields,” said Mr. Hoguet, who co-authored a paper published by SSgA on sovereign wealth funds in 2008.

Within equity, a larger portion of the funds' portfolios is moving into emerging markets — whether their own or others, according to Pascal Duval, executive managing director for Europe, Middle East and Africa at Russell Investments in London.

“They're redirecting more (assets) to invest in their own economies,” Mr. Duval said. “They're also now more likely to invest in cross-holdings of other emerging markets; for example, investors in Southeast Asia are increasingly looking at the Middle East because their economies rely on the same major (economic) dynamics.”

Oxford's Mr. Monk pointed to other signs of cooperation among the funds. “The idea is to facilitate local understanding” by partnering with other SWFs. “There's a willingness to improve upon the knowledge base.”

Mr. Hoguet added: “My belief is that sovereign wealth funds will be able to both participate in and shape the global financial architecture."