Nothing to Fear but McFear Itself

We are to the point of fearing fear itself. America in all its resplendent free market capitalistic glory is on the auction block with few bidders. How this came to be is obvious in retrospect: too much exuberant leverage, not enough regulation; too strong a belief in asset-based prosperity, too little common sense that prices could go down as well as up; excessive “me first” greed, too little concern for the burden of future generations; a political morass unworthy of our Founding Fathers. You may have more to add to the list, but frankly there isn’t enough time. Historians can sit back and reflect, but at this very moment, America is for sale and there is fear and trembling in the auctioneer’s voice.

Average Americans know little of the ways of Wall Street nor will they ever, I suppose. Every day, these days, is on-the-job training for yours truly, so how could Jane or John Doe ever understand the complexities of overnight repos or reverses, the selling or buying of protection on corporations via Credit Default Swaps (CDS), or the reasons why some investment banks are saved while others are allowed to fail? They cannot. So let me put it simply. Credit markets are based on trust and when there is no trust, markets can freeze up. My Co-CIO Mohamed El-Erian has a great everyday example. Imagine yourself at the drive-thru ordering a Big Mac. At one window you order and pay, at the other – 20 feet ahead – you pick up your lunch. What if you thought that after paying at the first window, your 1000 calorie sandwich might not be waiting for you a few seconds later. You might not pay; business as usual might not take place. That is what is happening in the credit markets. They are frozen in “McFear.” After the failure of Lehman Brothers – an investment bank which took orders at one window, and promised to pay at another for trillions of dollars of those CDS, swaps, and other derivative “sandwiches” – institutional investors said that they’d prefer to stay at home and have peanut butter instead of risking their money ordering a Big Mac. And so their money goes into that figurative mattress instead of the register at McDonald’s, people are laid off, profits go down, bank loans become less available, our economic center cannot hold.

PIMCO’s Investment Committee to a man (no women yet) believes that capitalism is the best and most effective economic system ever devised, but it has a flaw: it is inherently unstable. Every economy, capitalist, socialist, or communist requires long-term capital assets to allow it to function: buildings, roads, factories, homes, all of which have expected lives of 30 years or more. A classic communist system would build these things and it would be done – no financing, no debt coming due, and no worries. Capitalism, however introduces an instability because it uses short-term profit maximization via the buying and selling of debt and equity that finance these same capital projects. Because capitalism has a dynamic of profit maximization at its core, companies and households take on more debt or less, issue more stock or less, and then trade these obligations amongst each other, creating the possibility of bubbles and bankruptcy, faux prosperity and instability.

It is during these periods of potential bankruptcy and accelerating instability, however, that capitalism becomes particularly vulnerable. Confidence is replaced by fear. Any economy requires a continual replenishment of buildings, roads, and yes homes in order to survive. But whereas an old-style communist government would simply budget them into their new 5-year plan and direct their people to build them, capitalism must accomplish the same task via prices, markets, and confidence that this invisible hand will lead to future profits. Take your home for instance. While housing prices for long periods of time in the 20th century didn’t go up or down much, it’s fair to say that you would be reluctant to buy a house (and your bank reluctant to lend you a mortgage) if you thought it was going to go down in price. Same thing when companies build factories and invest in research and development; profits and in turn higher prices are fundamental drivers of the capitalistic ethic.

A month ago when I spoke to a potential financial tsunami, it was not to bail out our position of already well protected Agency mortgage-backed bonds. It was to alert you and yes, policymakers, that this inherent instability in our capitalistic system was threatening to feed on itself first in the housing market and then spreading to financial institutions – banks, investment banks and insurance companies as the sale of assets in the process of delevering led to home foreclosures and then bankruptcies for weak institutions that held assets of all kinds. That was not, I think, an inaccurate assessment as recent events have proven. But importantly, because prices are going down in every asset class, the threat to future investment in long-term capital projects and the real economy becomes magnified. That doesn’t mean of course that capitalist investors must be guaranteed a profit. Far from it. But when prices in all asset categories decline by double-digits, well then Washington, London, Frankfurt, Tokyo, and Beijing – we have a problem. I reproduce last month’s asset price chart to accentuate my point. 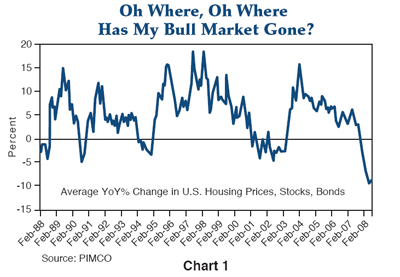 Now, as recognition of a systemic period of capitalistic instability becomes apparent, the focus has legitimately shifted to a systemic solution. Much of the focus has been on U.S. policy and rightly so. It is here where the excesses of exuberance were most pronounced. But, up until the Treasury’s $850 billion rescue package, the policy responses may have been necessary and significant, but they were ad hoc and perhaps insufficient. A systemic delevering likely requires a systemic solution, which moves beyond cyclical interest rate cuts, liquidity provisions, or even the purchase of subprime mortgage-backed bonds. We believe that the Federal Reserve must now act as a clearing house, guaranteeing that institutional transactions clear (and investors receive) their Big Macs at the second window. They must also take another bold step: outright purchases of commercial paper. They should also cut interest rates to 1%, because we are experiencing asset , and the threat of headline inflation is long past.

Whether these steps are successful depends in part on whether fear of fear itself has gone too far. They also depend on global coordination of policy because American-style capitalism is not just the bastion of America anymore. Almost all important economies have adopted it in one form or another and in doing so have assumed its inherent instabilities as well. Unlike the old days, however, policy responses are not dominated by the U.S. nor are they coordinated and identical. Some central banks have recently just finished raising interest rates (Brazil), while others have focused on tightening, not loosening liquidity (China). The net/net of all of this on a global-wide basis may not be as salutary as headlines indicate. And hopes for a unified global response may not be validated. Yesteryear’s supranational agencies centered on the IMF and World Bank cannot provide the solution nor have there been hints of a Plaza or Louvre Accord in the immediate future. Each economy appears to be pretty much on its own despite dollar swap arrangements and the like between Europe and U.S. central banks.

Future economic textbooks will likely teach that while capitalism is the most dynamic and productive system ever conceived, it is most efficient when there is a delicate balance between private incentive and government oversight. The benevolent fist of government will now join hands with Adam Smith in a most visible manner. Because it will, expect a lengthy recession but not depression, accelerating government deficits approaching a trillion dollars as forecast here in this Outlook several months ago, and the eventual rise of inflation and longer dated bond yields. For now however, it is best to focus on the potential unfreezing of commercial paper and a globally coordinated policy rate cut. Own the front ends of Treasury/LIBOR yield curves. Agency mortgage-backed securities will also benefit from Treasury buybacks. Stay liquid, remain in high quality. It is prudent at the moment to fear McFear itself.

Past performance is not a guarantee or a reliable indicator of future results. Investing in the bond market is subject to certain risks including market, interest-rate, issuer, credit, and inflation risk; investments may be worth more or less than the original cost when redeemed. U.S. government securities are backed by the full faith of the government; portfolios that invest in them are not guaranteed and will fluctuate in value. The S&P/Case-Shiller Home Price Indices measures the residential housing market, tracking changes in the value of the residential real estate market in 20 metropolitan region across the United States. In addition, the S&P/Case-Shiller® U.S. National Home Price Index is a broader composite of single-family home price indices for the nine U.S. Census divisions and is calculated quarterly.

This article contains the current opinions of the author but not necessarily those of the PIMCO Group. The author’s opinions are subject to change without notice. This article is distributed for educational purposes only. Forecasts, estimates, and certain information contained herein are based upon proprietary research and should not be considered as investment advice or a recommendation of any particular security, strategy or investment product. Information contained herein has been obtained from sources believed to be reliable, but not guaranteed. No part of this article may be reproduced in any form, or referred to in any other publication, without express written permission of Pacific Investment Management Company LLC. &Copy;2008, PIMCO.

No P&I Daily over the holidays