The deflating U.S./global asset markets are much like Churchill’s Russia: a riddle wrapped in a mystery, inside an enigma. “Who is driving delevering?” asks the Financial Times, and the answer comes back, “all of us;” yet it is hard to see it except in the headlines or to fix it, given a lineup of 6.8 billion suspects. Accustomed to the inevitable credit expansion spawned in the bowels of WWII finance, investors wonder why levered government agencies, banks and hedge funds must sell assets, raise capital or in the extreme, meet the market’s grim reaper in bankruptcy court. Aside from cyclical contractions and a brief bout of deflationary monetary policy in the Volkerian 80s, credit has always been available and at a relatively cheap price. Credit and debt finance is, in fact, the mother’s milk of capitalism: without it, entrepreneurs may transact, but economic progress would be most difficult with seashells or gold bars for mediums of exchange. And so governments and modern day central banks do their best to provide just enough milk in the form of credit to their economies so that business and employment thrive, while the rancid taste of inflation is disguised.

Yet credit creation modeled after mother’s or better yet – cow’s milk – is not always a predictable event. Almost always the milkmaid or modern-day farmhand is blessed with an ever increasing pail of the white elixir. Occasionally, however, because of irritable bovine bowel syndrome or just bad grass, Old Bessie doesn’t produce. So it is in today’s financial markets. Debtors in need of more milk are squeezing the teat and not much is coming out. And this deflating supply of credit is in effect the financial market’s version of Mad Cow disease. It can be deadly.

While the ultimate explanation rests with a host of factors associated with leverage, financial derivatives, lax regulation, and indeed the sociological willingness of the investment public to take excessive risk in search of diminishing returns, let’s just simplistically point – in keeping with our bovine analogy – to the one asset that best typifies all of these fragilities. Let’s blame it on the barn, or if you must, home prices. Here is one asset that all observers can agree is going down in price for justifiable reasons. Maybe not Donald Trump’s Palm Beach mansion at $95 million big ones – thank you very much – but everybody else’s. They’re going down because quite simply, they went up too much and were financed with excessive debt. The housing bubble was well inflated by low interest rates, easy, and in some cases fraudulent credit, a lack of federal and state regulation, and a gullible public who read the history books for the past half century and knew full well that home prices never, ever go down. Not much of an enigma there. No riddle to be solved it would seem. It was simply a fairy tale too good to be true.

Yet housing, unlike other asset classes, carries with it an aura more like a bad dream than a fairy tale. Unlike the frog that when kissed turns into a handsome prince, housing can morph a froglike economy into something resembling Godzilla. That is because it is the most levered asset class and the one held by more “investor” citizens than any other. U.S. homes are market valued at over 20 trillion dollars with nearly half of the value supported by mortgage finance of one sort or another. At first blush that appears to be reasonably levered, but at the margin, homes purchased in 2004 and beyond are now at risk of turning upside down – negative equity – and there are some 25 million or so of those. The “upsidedownness” in many cases results in foreclosures, or outright abandonment and most certainly serves as an example of what not to do for millions of twenty-somethings or new citizens choosing between homeownership and renting. The dominoes fall month-by-month, forcing prices ever lower as shown in Chart 1 provided by Case-Shiller. An asset deflation in turn becomes a debt deflation, as subprimes, alt-As, and finally prime mortgages surrender to the seemingly inevitable tide. PIMCO estimates a total of 5 trillion dollars of mortgage loans are in risky asset categories and that nearly 1 trillion dollars of cumulative losses will finally mark the gravestone of this housing bubble. The problem with writing off 1 trillion dollars from the finance industry’s cumulative balance sheet is that if not matched by capital raising, it necessitates a sale of assets, a reduction in lending or both that in turn begins to affect economic growth, creating what Mohamed El-Erian fears as a “negative feedback loop.” 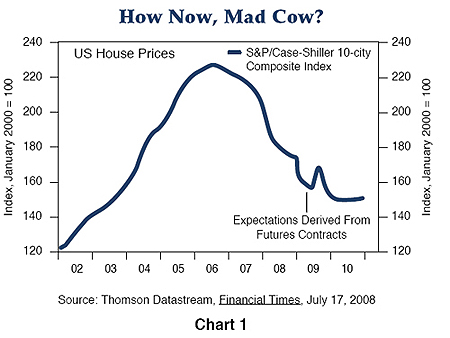 A trillion dollars is a lot of money, but in this age of photoshop wizardry it seems that experts can make just about anyone or anything look good. Lose a trillion? Well, just write it off a little more slowly, or suggest that mark-to-market accounting is not applicable to banks and investment banks. As a matter of fact it may not be. GaveKal’s Anatole Kaletsky points out that “the whole point of a bank is to exchange short-term, liquid liabilities for long-term illiquid assets whose value is hard to gauge. This liquidity and maturity transformation, in fact is the main social function that a banking system provides.” I and others on PIMCO’s Investment Committee wholeheartedly agree. But the reluctance to remark rancid mortgage loans rests on the heretofore inevitable conclusion that home prices will bottom and then reflate within a reasonable period of time. If they go down even more, and stay down, well then Washington – Wall Street – and ultimately, Main Street – we have a problem. That is why Hank Paulson and in turn Christopher Cox are waving their independent but coordinated wands in an effort to 1) prevent a market run on the price of bank and investment bank stocks until there is enough time to reflate the U.S. housing market, and 2) ultimately recapitalize our primary mortgage lenders – FNMA and Freddie Mac. An interesting press release by the CBO on July 22nd, by the way, points out that the GSEs are barely solvent (9 billion dollars) when their assets are valued at current market prices. Housing’s cow needs to turn into a bull real quick.

Make no mistake, the current conundrum that must be solved is: how to make the price of 120 million U.S. barns stop going down in price and then to make them go up again. That, however, is easier said than done. One of the wisest men I know has this serious but admittedly impractical solution: have the government buy one million new/unoccupied homes, blow them up, and then start all over again. Absent that, he’s not quite sure what to do, nor am I, with the exception of the next paragraph’s proposal. 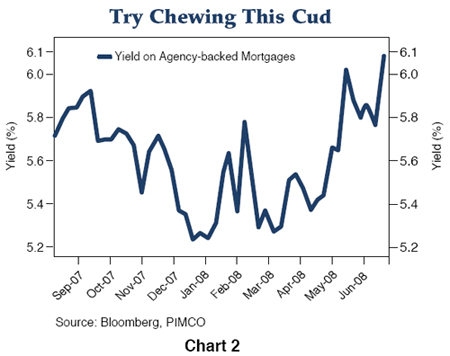 Up until this point, the joint efforts of the Fed and the Treasury have been directed towards maintaining the stability of our major financial institutions, recapitalizing their balance sheets in “current form,” and lowering the cost of mortgage credit. All are crucial to any solution, but it is this third and last point where markets have failed to cooperate. With Fed Funds having been lowered from 5¼% to 2%, it would have been logical to assume that the price of mortgage credit would go down as well and that the price of homes would at least slow their current descent. Not so. As Chart 2 points out, the yield on a 30-year agency mortgage-backed loan has actually risen since the Fed somewhat unexpectedly began to lower Fed Funds in early September of 2007. Add to that of course, the increased fees, points, and total spread that an actual homebuyer pays to finance his purchase now as opposed to then, and it is obvious that homes are not the bargains that starving realtors claim they might be. Financial asset prices, as well as those for homes, are really the discounted present value of what investors believe those assets will be worth far into the future. When the discount rate – in this case a 30-year mortgage – rises faster than the expectations for home prices themselves – then the price of a home falls. 7% + “all in” yields for current home financing, in contrast to prior periods of monetary easing, are lowering, not raising the discounted present value of an existing home. Blow them up? Well, yes, I suppose if we could. But absent that, lowering the cost of mortgage credit via the omnibus housing/GSE bill now placed before the Congress and the President is the best way to begin the long journey back to normalcy.

To return the housing, cow milking, asset price deflating metaphor to its broader context, the increasing price of credit is a common denominator worldwide in the delevering process which it drives, or in turn, is driven by. If the cost of credit – the discount rate for present value – would go down, then asset prices would be better supported. Stocks wouldn’t sink so fast, commercial real estate wouldn’t wobble so, and Donald Trump wouldn’t have to exaggerate as often about how rich he is (make sure to buy T-Bills or GSE mortgages with that $95 million, Donald – if it closes). But the cost of credit is going up, not down, in contrast to prior cycles, because astute investors recognize the myriad of global imbalances that threaten future stability. In addition to home prices, $130 a barrel oil and their resultant distortion of global wealth and financial flows head that list. For now, investors should remain in high quality assets – until – until, well…until the prospect for home prices points skyward or until the cows come home, whichever one’s first.

Past performance is not a guarantee or a reliable indicator of future results. Investing in the bond market is subject to certain risks including market, interest-rate, issuer, credit, and inflation risk; investments may be worth more or less than the original cost when redeemed. U.S. government securities are backed by the full faith of the government; portfolios that invest in them are not guaranteed and will fluctuate in value. The S&P/Case-Shiller Home Price Indices measures the residential housing market, tracking changes in the value of the residential real estate market in 20 metropolitan region across the United States. In addition, the S&P/Case-Shiller® U.S. National Home Price Index is a broader composite of single-family home price indices for the nine U.S. Census divisions and is calculated quarterly.

This article contains the current opinions of the author but not necessarily those of the PIMCO Group. The author’s opinions are subject to change without notice. This article is distributed for educational purposes only. Forecasts, estimates, and certain information contained herein are based upon proprietary research and should not be considered as investment advice or a recommendation of any particular security, strategy or investment product. Information contained herein has been obtained from sources believed to be reliable, but not guaranteed. No part of this article may be reproduced in any form, or referred to in any other publication, without express written permission of Pacific Investment Management Company LLC. &Copy;2008, PIMCO.

May 2008: All Quiet on the Western Front