Venture capital firms are raising so much money that it is fueling an overfunding of companies.

With all of that capital, some venture capital firms have been hunting for potential unicorns, companies worth $1 billion or more. Investing in the next $1 billion-plus unicorn has become a badge of honor and marketing tool, and the massive amounts of capital pouring into the asset class is fueling a lack of discipline and a recent drop in the number of exits as companies struggle to match their optimistic valuations, industry insiders say.

"There's a desire to attain a $1 billion valuation ... whatever the round number is," and these venture capital firm executives are stretching to get there, said Ed Zimmerman, New York-based partner and head of the technology group at law firm Lowenstein Sandler LLP.

This "lack of discipline," mainly in late-stage investment, he said, has led to an increase in so-called vanity valuations, portfolio company valuations that are larger than may be justified by the company's performance, he said.

These valuations are not supported by the by recent transactions of comparable companies or by any other metric, Mr. Zimmerman said.

Due to the abundance of capital raised by venture capital and growth equity funds, money is being spent by some managers based on the need to deploy capital, Mr. Zimmerman said.

Compounding the situation is the historic opacity of the venture capital and startup market, he said.

"There's no disclosure of performance until a company is public," he said. "People in the loop will get varying degrees of information and information can be very powerful."

Some industry insiders say these vanity valuations are making it more difficult for venture capital firms to exit because not all of the companies are able to sell or go public at those high valuations, he said.

Indeed, exits are down. Venture capital firms had fewer exits in 2019, dropping 13% to 882 worth a combined $256.4 billion even as the dollar value of exit transactions nearly doubled. By comparison, there were 1,015 exits totaling $130.2 billion in 2018, the PitchBook-NVCA report shows.

It's possible that a company could grow into its aggressive valuation. But Mr. Barlow said the percentage of companies that have grown into their valuations "is almost a coin flip, 50/50."

However, if the company valuation is high based on the last round of venture capital investment, but the company's performance since then has been "underwhelming," a secondary or other potential buyer could heavily discount the investment, Mr. Barlow said.

"The seller may not want to sell at a discount. It's harder to convince themselves and their organization that they should take that big of a haircut," he said.

In 2019, there was an increased focus by some investors on companies that were "burning less cash and trending toward profitability," Mr. Barlow said.

There's a little bit of a flight to quality with investors seeking companies that have a path to profitability, he said.

"My view is that investors are better off with companies that can be resilient in case of an environment with less liquidity and a more difficult climate for companies that are reliant on the next funding wave," Mr. Barlow said. 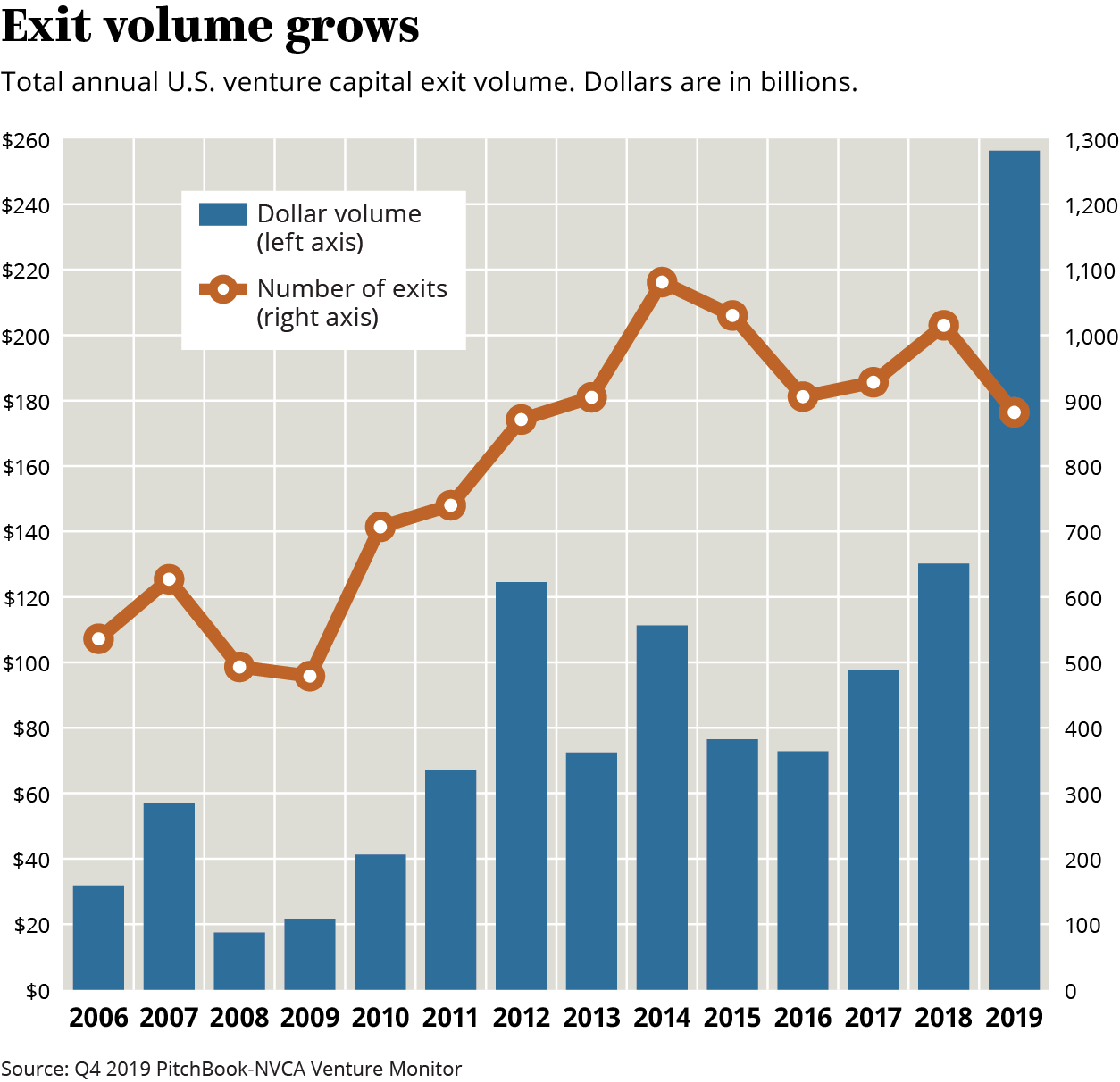 Investors have been moving into venture capital as a way to gain exposure to the technology companies that are disrupting industries or will be doing so in the future, boosting portfolio company valuations.

Technology is transforming industries previously untouched by disruptive technological advances such as logistics and health care, he said. This is leading to investor interest and higher portfolio company valuations, Mr. Miller said.

"Later-stage companies are priced to perfection. There's not a lot of value" to be gained on exit, Mr. Miller said.

Tony Ialeggio, a managing director and chief marketing officer at Commonfund Capital, said that firm executives "have seen exits at the last valuation or less."

However, with several big name companies including WeWork Cos. Inc. suffering pre-IPO valuation declines compared to their valuations after their last round of venture capital financing, some venture capital firms are starting to pull back from the higher valuations, Mr. Miller said. WeWork's valuation fell to $7.8 billion from a high of $47 billion in 2019.

It's not as easy to get venture capital financings for good late-stage companies now as it was six months ago, Mr. Miller said. Some venture capital firms are starting to invest more money in fewer portfolio companies, leading to fewer late rounds of investments, he said.

This has not had a meaningful impact on early stage valuations yet, Mr. Miller said.

"It takes six months to 12 months for (company valuation issues) to trickle from the public markets to the private markets," he said.

Even so, there is an abundance of capital for early stage companies, leading to a competitive market.

"The early-stage funds generally have carrying values at a discount to the high-priced, headline-grabbing, later-stage financings that we all read about," said Scott Voss, Boston-based managing director of alternative investment fund-of-funds and secondary market firm HarbourVest Partners.

Venture capital funds that invest early in a company's journey generally invest at much lower valuations than later-stage funds, he said.

"Also, once the (venture capital-backed) companies are public there is also typically a discount applied to the true public market value. That discount is usually 20%," he said.