Private credit managers are moving fast, raising larger funds than ever, but the question for investors is whether these behemoths will break anything, chiefly the yield and illiquidity premium to public debt that makes the asset class attractive.

In the past, a maxim of alternative investment investing has been that the more capital pours into a sector, the lower the performance. Private credit returns already are muted compared with other alternative investment asset classes because they are tied to interest rates, which many expect to continue to remain low.

"Multiple factors impact returns for a given vintage, including the general level of interest rates, which is independent of fund flows," said Mary Bates, Portland-based managing principal and private markets consultant at Meketa Investment Group.

Private credit is popular among investors as a fixed-income alternative. Asset owners now think about private credit as a separate asset class rather than a one-off investment, Ms. Bates said. What's more, since the pandemic started, more investors are expanding their view of private credit beyond traditional loans to companies to include real estate and infrastructure credit, she said.

Managers are capitalizing on investor interest by raising funds sometimes 50% to 100% larger than their predecessor offerings and ex- panding into new types of private credit.

Burgeoning private funds
The average size of global private debt and direct lending fundraising has skyrocketed in 2021. Dollars are in U.S. millions. 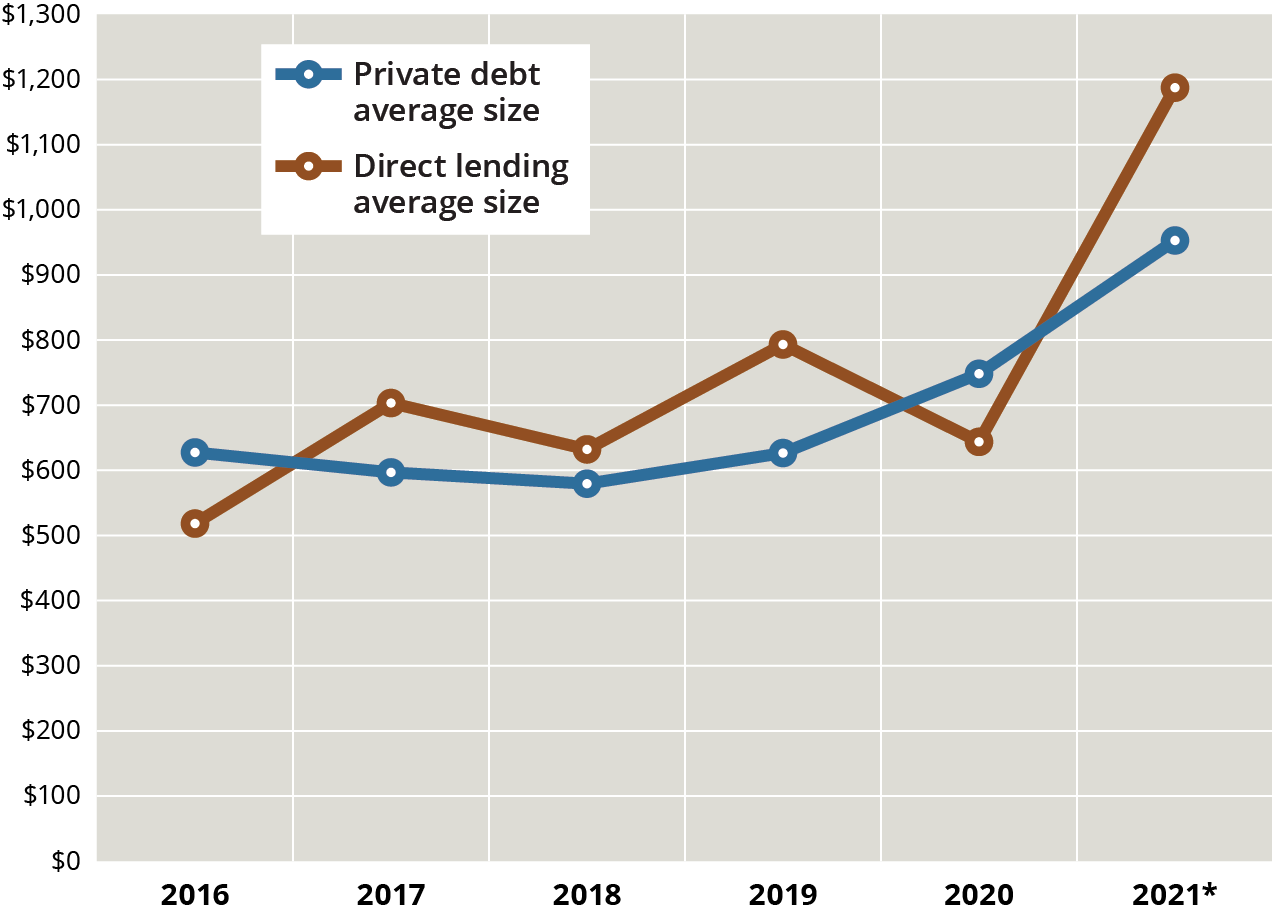 Asset owners are increasingly adding or boosting exposure to private credit. The $477.7 billion California Public Employees' Retirement System, Sacramento, could add a dedicated allocation to private credit as part of its current asset-liability management process. Interim CIO Dan Bienvenue in July told the board that he expected to complete the asset-liability study, with a new asset allocation selected by the board, in November. CalPERS currently invests in private credit through its private equity allocation.

Indeed, according to Preqin, private credit returns have been dropping for several years. The three-year rolling internal rate of return for private credit was 3.7% as of Sept. 30, down from 12.7% in 2014.

Industry executives say investors should expect lower returns in future private credit funds due to a decrease in the illiquidity premium for private credit over public credit.

At CalPERS' off-site board meeting in July, Thushka Maharaj, London-based global strategist, multiasset solutions at J.P. Morgan Asset Management, attributed the "significant compression" of the return premium of private credit compared with returns of public debt to more capital investing in the sector searching for yield as well as a decline in underwriting standards for the loans.

"In aggregate, we are seeing underwriting standards starting to fall given the huge amounts of liquidity we have in financial markets," Ms. Maharaj said.

"With fixed income yielding less than 2% globally, more investors are allocating capital to private credit where one can invest in low LTV (loan-to-value) loans and still generate meaningful excess spread by accepting some illiquidity rather than moving up the risk curve in public markets," Mr. Givone said.

Ares Management Corp. revealed that its new crop of funds will be at least 20% larger than the prior funds in the series, with many much larger than that. Ares has raised $5.1 billion in the first close of its second U.S. senior lending fund, Ares Senior Direct Lending Fund II, which already exceeds the fund's fundraising target and is 70% larger than its predecessor fund size, said Michael Arougheti, Ares' CEO and president, during the firm's July 29 earnings call. With expected fund leverage, the fund currently has about $8.1 billion in buying power and is still raising capital, Mr. Arougheti said.

Ares' second pan-Asian secured lending fund, SSG Secured Lending Opportunities III, which closed with more than $1.6 billion, is double the size of the prior fund.

"Funds are being raised faster than ever before, and accelerating impact from disruptive technology and changes from the pandemic are powering an increased demand for private capital across sectors and regions," Mr. Lee said. Carlyle's 3-year-old opportunistic credit business had close to $6 billion in assets under management as of June 30, up 22% year-over-year, "with further growth ahead," he said.

Carlyle is currently raising its second opportunistic credit fund, Carlyle Credit Opportunities Fund II, with a $3.5 billion fundraising target, 40% larger than the first fund that closed in 2019 with $2.4 billion.

In all, Carlyle's global credit business — which includes collateralized loan obligations, real estate credit and other credit strategies — had $61 billion in AUM as of June 30.

At the same time, the funds' investment periods are getting shorter, especially for credit funds, because deals are being executed and financed on shorter timelines, Mr. Lee said. Typically, Carlyle executives invested a fund across a four- or five-year time horizon, which has "sped up" to four and, "in some instances three years, maybe even sooner in certain high-velocity asset classes like credit," he said.

Secondaries volume surges in first half of 2021 – survey
Competing views

There is a tension between competing industry views of the current outlook for the asset class.

"The trick is getting access to the highest-quality deals in the marketplace," she said.

Indeed, in one of the largest private credit sectors, direct lending, most investors are seeking income generation and preservation of capital over absolute returns, Ms. Simeone said.

"I think successful direct lending managers differentiate themselves by avoiding losses vs. seeking deals with the highest returns, which mostly carry higher risk," she said.

Some in the industry believe there will be disruption among credit managers.

"There are roughly 700 direct lenders not to mention distressed managers … that raised capital to take advantage of the dislocations," said James Clarke, a New York-based managing director at Blue Owl Capital. "The COVID-19 dislocation lasted three to four weeks and now they can't put the money to work."

Investor demand has created a lot of supply for managers, "however our belief is that not all managers will weather that dislocation," he said.

Blue Owl's fund can provide flexible capital for specific situations, he said. But even though it's a "frothy market," Blue Owl executives have only done 3% of the deals they have looked at, Mr. Clarke said.