Mellody Hobson of Ariel hits her stride as co-CEO

Mellody Hobson has a strategic plan for Ariel Investments LLC, the latest manifestation of which is a bold new spin on private equity that seeks to address racial economic inequality.

Ms. Hobson was appointed to the newly created role of co-CEO in July 2019, a job she shares with John W. Rogers Jr., who is also chairman and CIO. Ms. Hobson retained her position as president of the Chicago-based active value equity manager, which managed $15 billion as of Jan. 31 for institutional and retail investors.

In a Feb. 19 interview with Pensions & Investments from her home in California where she is working remotely, Ms. Hobson said the “pillars” of the strategic plan she built after becoming co-CEO are human capital and talent, brand, product and technology.

It’s in the product sleeve that Ms. Hobson has taken the biggest step — the Feb. 17 launch of Ariel Alternatives LLC.

“As you might imagine, private equity is completely new for Ariel. But so many times, our clients have said that because the long-term nature of our (stock) ownership, ‘you’re like a public-private equity manager because you own a stock for 20 years.’ We think private equity is a natural outgrowth of what we do,” she said.

The new private equity firm’s first investment strategy is Project Black Management Co. LLC, “an innovative effort (that) will invest in middle-market companies that may or may not currently be minority-owned, transforming these entities into certified minority-owned business enterprises of scale and forging a new class of Black and Latinx entrepreneurs,” an Ariel news release said. 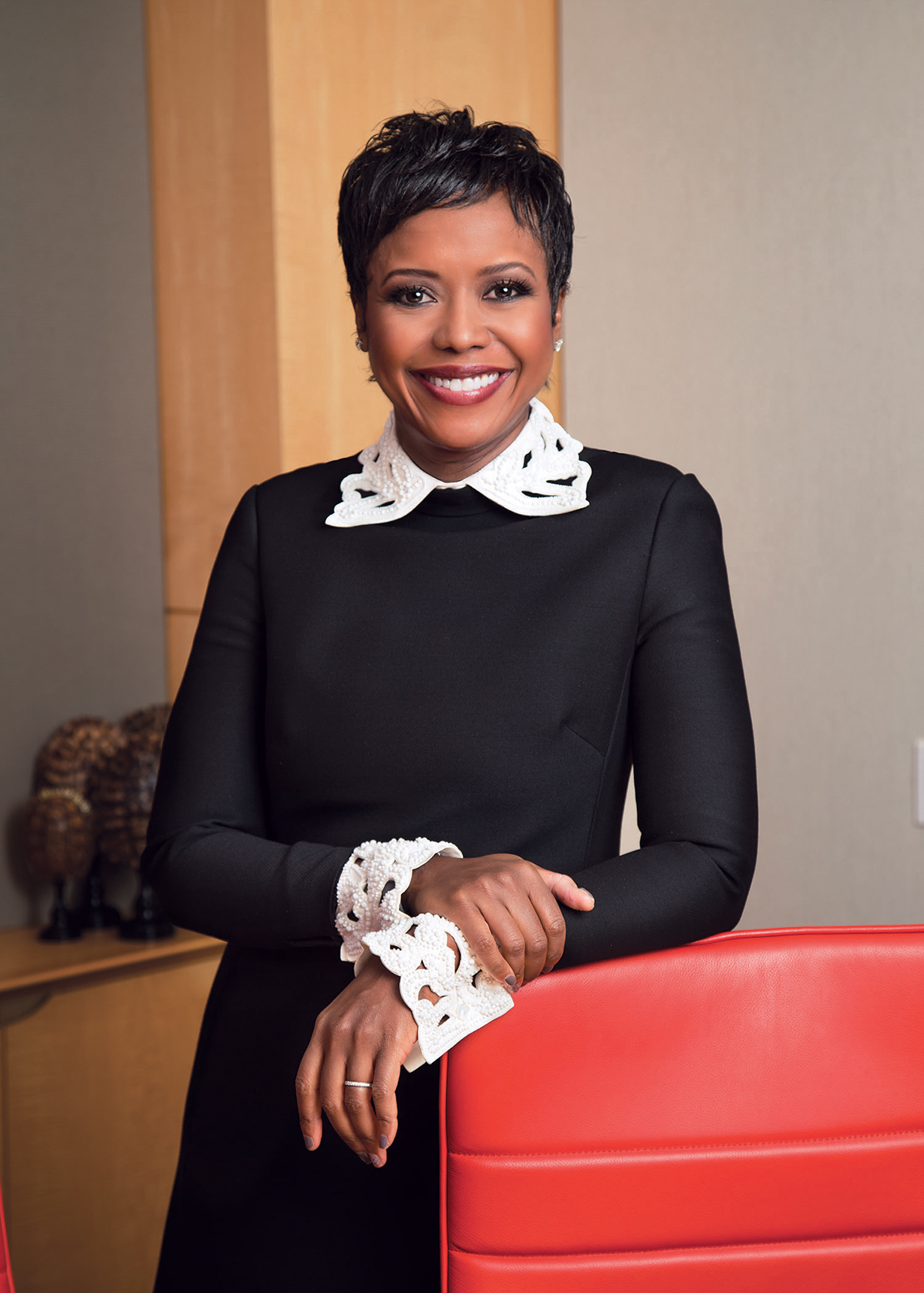 The initiative will help these companies grow so they can compete to gain the business of Fortune 500 companies, she said.

J.P. Morgan Chase, New York, committed up to $200 million to co-invest alongside Project Black for future transactions as part of the bank’s campaign to advance racial equality, an Ariel news release said.

‘A heavy lift’ While many details remain to be hammered out for Project Black, which Ms. Hobson acknowledged in the interview “is a heavy lift,” the development and planning of Ariel’s move into private equity with a defined purpose clearly was a journey of discovery for her.

On a fact-finding mission last summer, Ms. Hobson said she set out to learn more about private equity, to meet every black person in private equity and to test her idea for Project Black with a wide range of industry sources.

Ms. Hobson said she sent emails to many people in the private equity industry asking if they would talk to her about the industry and her specific plan. She said “everyone responded” and those sources recommended other people she should contact.

She broadened her circle of money management contacts, shared her idea about a twist on the typical private equity model and “asked people not to tell me why my idea is good, but instead to tell me how naive I am, what I don’t understand, and tell me everything that I haven’t thought of that’s wrong. And you know, most people I talked to said this is a really good idea.”

Ms. Hobson’s passion to form an Ariel private equity company was another initiative among many over the years that Mr. Rogers supported, she said, adding that her appointment as co-CEO was more about allowing Mr. Rogers to focus on investment management — “because this is the only thing he truly loves” — than about succession or other issues.

Increased ownership In line with her promotion, Ms. Hobson increased her ownership stake in Ariel to 39.5% by buying 14% of Mr. Rogers’ stake, making her the firm’s largest shareholder. Mr. Rogers owned 34.1% following the promotion in July 2019.

‘Our clients have said... “you’re like a public-private equity manager because you own a stock for 20 years.” We think private equity is a natural outgrowth of what we do.’

“John had never sold one share prior to me taking on the new role. This was a big deal to people and they were curious about the fact that I was going to be the one making decisions for the firm and that he would be focused on investment. And that’s really how it works. He oversees the investment portfolios and the research. I run everything else,” Ms. Hobson said.

She added: “I also think my new role made it clear to people that I am not leaving the firm because we kept getting a lot of questions and comments like ‘where’s Mellody going?’ ... I kept telling people, I’m not going anywhere. I know this sounds really crazy, but I knew from the start that I would work at Ariel for my career.”

Before joining Ariel as a full-time employee in August 1991 straight out of Princeton University, Ms. Hobson was a college intern at Ariel.

In an interview in January, Mr. Rogers praised Ms. Hobson’s new initiatives, noting that “she is doing amazing things.”

The firm’s assets under management rose 15.4% to $15 billion in the year ended Dec. 31 from a combination of good returns and net inflows. Mr Rogers said in the interview that Ariel had attracted “a lot” of new clients.

The addition of Ariel Alternatives, given that it’s “purpose-driven private equity rather than traditional extractive private equity,” is yet one more reason both institutional and retail investors are drawn to Ariel, said Michael S. Falk, partner at Focus Consulting Group Inc., Long Grove, Ill., in an interview.

‘A rare characteristic’ “Ariel has a rare characteristic among money managers ­— celebrity. The leaders — John and Mellody  — have a level of celebrity and are well known outside the investment management business. When you combine that with the firm’s focus on diversity both inside and outside of the firm ... and now its private equity strategy, it’s a very attractive package. The firm has a wonderful pedigree,” Mr. Falk said.

But he warned that like many value managers, Ariel’s investment teams “have to be aligned about value investing and make sure that their definition of value equity investment still is valid in a changing global market.”

As for Ms. Hobson’s first pillar — human capital and talent — she noted that Ariel hired a new chief talent officer, Marlo J. Gaal, from Groupon Inc., adding that “she is a superstar.”

“I told (Marlo) that I’m not looking for employees, I’m looking for partners. We are constantly talking about the talent, the culture, the people variable and making sure that we’re maximizing opportunities,” Ms. Hobson said, adding that “great people are reaching out to us about jobs and (there are) so many awesome opportunities to add to our team.”

Ariel currently has 107 employees based in Chicago, New York, Washington and Sydney; 72% have diverse backgrounds and 64% are women or minority employees in senior- or executive-level positions.

After a deep dive into the way that Ariel describes and presents itself in various formats, Ms. Hobson said she is excited about a new branding campaign that will be rolled out in a few months.

“Words matter. So (is) making sure that we are telling the Ariel story about our 30-year history, concisely, clearly, crisply, and in a way that distinguishes us from our peers,” Ms. Hobson said, stressing that the firm’s iconic turtle will remain part of marketing, advertising and other communications.

Ariel has made progress on the fourth strategic pillar — technology — through a rebuild of its infrastructure and revamping Ariel’s website, Ms. Hobson said.

“We feel really good about the technology changes so far because they will increase efficiency and require fewer people if your technology is protected in the right way,” Ms. Hobson said.

Despite the difficulties of the past year caused by the COVID-19 outbreak, Ms. Hobson said she is “very energized. I want to slingshot out of this pandemic. I’m working so hard and so is the entire Ariel team.”