By JAMES COMTOIS and PAULINA PIELICHATA

With so many money managers hiring chief diversity, equity and inclusion officers, how are these new senior executives measuring progress? Chief diversity, equity and inclusion officers in interviews with Pensions & Investments outlined tangible goals and quantifiable targets they have set for themselves and their organizations. For example, BlackRock Inc. measures employee reaction to its DEI efforts and analyzes any gaps in the experience of underrepresented groups through its annual employee opinion survey. 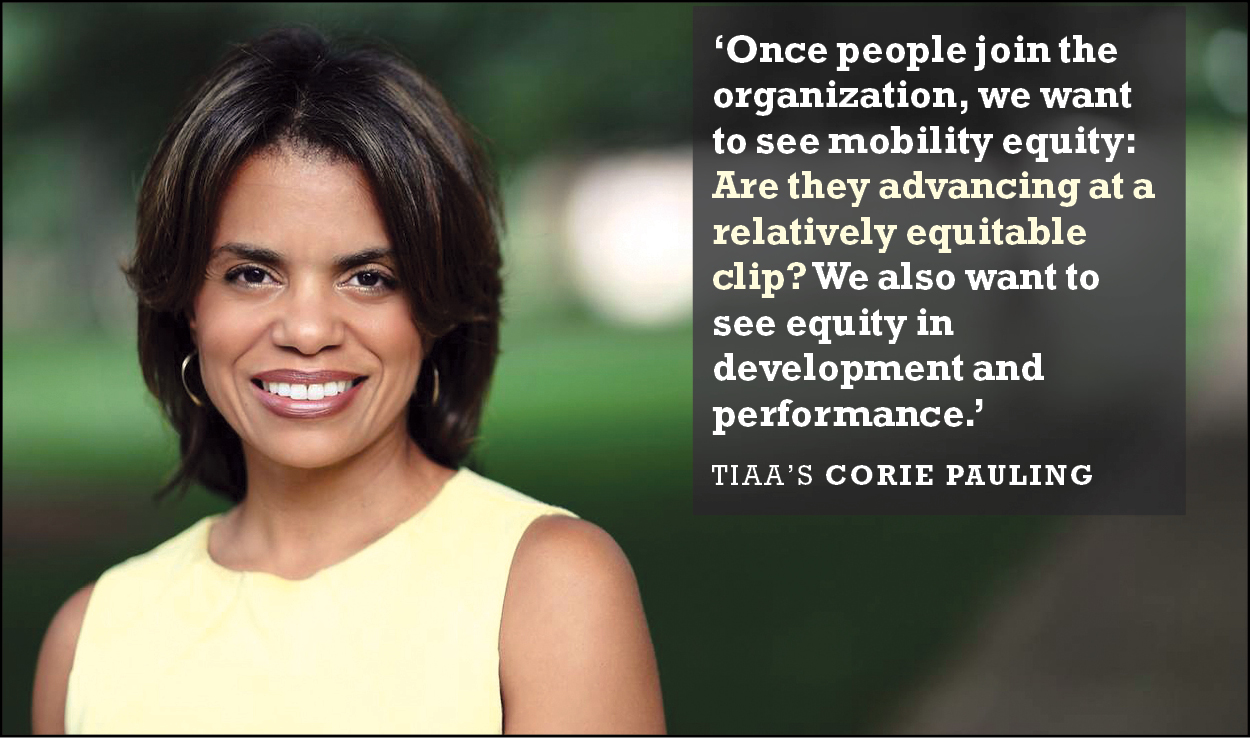 “The survey gives us insights into where to look further to engage our employees directly in problem-solving dialogue and focus group discussions,” said Michelle Gadsden-Williams, New York, who joined BlackRock Inc. in September as managing director and global head of diversity, equity and inclusion.

After achieving its goal of having women make up 30% of its global managing directors and directors — a target the firm set in 2017 — BlackRock intends to further grow its female senior leadership globally by 3% each year.

In addition, Ms. Gadsden-Williams and Manish Mehta, global head of human resources, sent a memo to BlackRock employees on April 1 announcing that the firm would undergo an external review of how its diversity, equity and inclusion policies affect stakeholders.

“We’re being explicit about our focus on equity, which is a tangible space where you can measure impact in objective, quantifiable ways,” Ms. Pauling said. “We’re using data points, demographic trends, best practice information.”

Ms. Pauling added: “Once people join the organization, we want to see mobility equity: Are they advancing at a relatively equitable clip? We also want to see equity in development and performance.”

For Ares Management Corp., one area in which the investment firm is setting quantifiable targets is in recruiting talent. Indhira Arrington, Ares’ recently appointed managing director and global chief diversity, equity and inclusion officer, said that the firm is mandating diverse slates for interviewing first-round candidates.

“That means having a minimum of four candidates, and half of them have to be diverse,” New York-based Ms. Arrington said. “We’re also asking our executive search partners to meet this diverse slate mandate.”

Ms. Arrington, who joined the private equity firm in January, added that Ares also conducted a qualitative analysis where all of its business units received inclusion scores from an outside consultant by various diversity dimensions, which included gender, race, ethnicity, gender identity, veteran status, disability and caregiver status.

“We want to ensure our strategy, processes and policies account for more than just gender and ethnicity,” Ms. Arrington added.

But when it comes to increasing the number of women in senior positions, Ms. Hudson said that having a long-term focus for employees can actually hold back diversity efforts.

Ms. Hudson noted that the industry and firm is struggling “across the board ... with having women in portfolio management roles” because of low turnover in these positions.

“You want that tenure among portfolio managers, but it makes it more difficult to move the needle on those numbers,” Ms. Hudson said.

Aegon isn’t publicly stating other targets such as minority employees in senior roles because the firm doesn’t have the data, which makes such targets difficult to set, Ms. Hudson said.

To increase the number of diverse employees, not just women but also ethnic minorities and LGBT, Ms. Hudson said: “We need to have data to look at what is actually working and compare results over time not just through gender but also including race and social mobility, sexual orientation.”

Over at Invesco Ltd., the Atlanta-based firm set a target to increase the representation of women among senior managers to 30% in 2020 from 26% in 2018. Having achieved that, the firm is now aiming to grow this figure to 35% by 2022.

However, Anna Penn, head of diversity and inclusion, North America, at Invesco said that data is a challenge when it comes to trying to get ethnicity metrics globally. “Right now, the only place that we hold a full set of ethnicity data is in the U.S., just due to government-mandated reporting there,” Ms. Penn said. “We did launch a self-identification campaign in October of last year. So, we’ve asked all colleagues globally. It’s completely voluntary.” Ms. Penn added that the firm asked for primary identity.

Ms. Penn added that the firm will be able to create a better snapshot of employee base once the data is collected on for example, race and ethnicity, sexual orientation and gender identity.